Gljúfurá is your typical small and beautiful salmon fishing in Iceland river in the North-Western part of the country about 200 km (120 miles) from Reykjavík, the capital.

The river runs into Lake Hópið, which is by the seaside. The name Gljúfurá means “canyon river” and it takes its name from its many canyons and gullies it runs through. The lower and mid sections of the river are easily accessible by 4x4 vehicles whereas the upper sections require hiking into the hills. Those willing to take the hike are rewarded with pools that are well rested and fish that haven't seen a fly in a while.

Gljúfurá would be considered a late run salmon river with the main salmon runs not showing up until late July and early August and the best salmon fishing being August and September. Because of its small size, the average size of salmon in the river is surprising to many.

Starting in May though, the lower sections of the river get great number of sea run brown trout and sea-run Arctic char. The sea run brown and char fishing tend to remain consistent throughout the season with the average weight of char being between 1 and 3 pounds and seatrout up to 6 pounds regularly caught. In the upper section of the river, there is good resident brown trout fishing with average sizes for those being in the 2-3 pound range.

Gljúfurá is a fly fishing only river with a strict catch and release policy for all salmon. Anglers are allowed to keep 1 sea trout or sea char per/rod/day if they wish but we encourage anglers to practice full catch and release.

Three rods are allowed in Gljúfurá and are they sold together - meaning your group will have the whole river to yourself.

Included in the price is a small and beautiful lodge overlooking the river. The lodge has two double/twin rooms and one single room, all basic amenities, hot tub, large veranda, BBQ and basic kitchen.

This is a perfect river for small groups that prefer privacy while fishing.

The small town of Blönduós is only 10 min drive away from the lodge and there you can find all basic services.

Check out some of our other Salmon fishing options like: 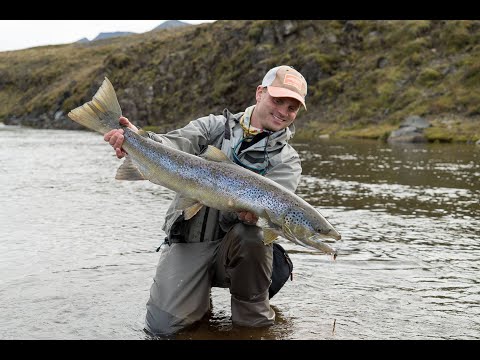